A World of Doctors 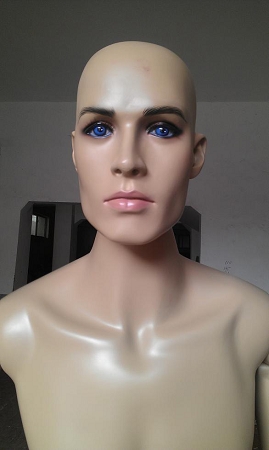 There are a few things that tend to cause discomfort in some individuals. Mannequins are one of them. While phobias are typically described as a fear that is irrational, there are dozens of them in the world. Two of these phobias describe the fear of mannequins that some individuals fear. Male or female the presence of these displays could drive one into an anxiety attack.

Automotonophobia is a very long word to descrive the fear of anything relatively humanoid in doll form. This could include wax figures, animatronics, or any other figures that is created to represent the human form (about.com). This fear is actually so intriguing that House of Wax portrays the fear of wax figures by showing individuals in panic in the attraction. This could be one of the reasons that this phobia has become so prominent in current culture. The discomfort that an individual feels is quite unwarranted.

This phobia is usually considered a subdivision of Autmatonophobia. Usually “the fear of children, mannequins, dummies and dolls” according to Peterfield hypnotherapy. This phobia could quite possible come from the discomfort of the store mannequins that are faceless and posed in awkward positions. Pop culture hasn’t helped with this fear after the release of movies like Dead Silence where the dummy is going on a murderous rampage. Even in Doctor Who the first episode with one of the new doctors is about mannequins coming to life around the city of London.

With the continuation of Hollywood to express the fears of mannequins and other humanoid items makes it difficult to discern that there is no harm from the human like items. In fact, the better the technology becomes the less awkward the mannequins become. Actually, with the more realistic looking mannequins, we hope that mannequins make it to the big screen more often!

Rather than being stiff and awkward, which is one of the key things that may turn someone off about the mannequin, now both male and female mannequins are able to come with adjustable joints at the knee, elbows, thighs and shoulders so they are adjustable to poses that would be a little bit more, relaxed, then the tense movement that they had prior. Also with many female mannequins, wigs are being incorporated into the design to add a more human element to the mannequin.

Rather than the stiff blank dummies that were available in prior decades’ newer mannequins aim to close the gap between the awkward feel of a blank face with more realistic models.

While the other models with the blank face are still available today, Joslin Displays works to bring you the best in the business, that includes headless, egg head mannequins and the newest mannequins that are the most realistic we can offer. Any pose, any mannequin Joslin Displays are the people to call for all of your store display needs.

If you are in need of new mannequins, or would like to see what mannequins we have in stock, visit our website joslinmanneuins.net or call us today at 1-800-325-1030 to find the right mannequin for you and your store.